Adult Years - Today I want to talk about clothes 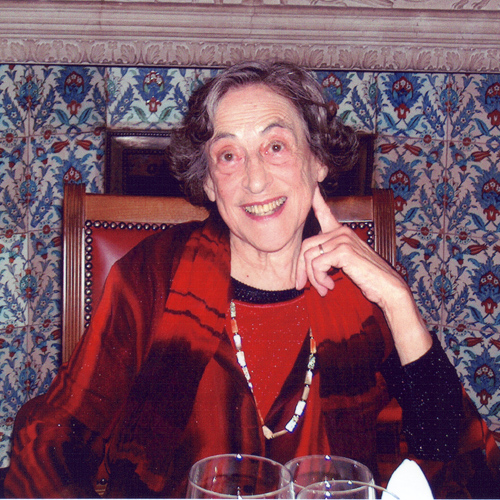 Today I want to talk about clothes.

I look at advertisements, availability and choice. It is all so easy: go to any store, find what you want, pay and enjoy wearing your purchase. And what about children’s clothes. Variety galore, easy to wear, easy to wash and of course stylish, with logos – a must for some kids.

And then I look back at my own childhood. I think of Fräulein Senf, the dressmaker. Senf means mustard. Funny name, I thought, but I never laughed. She came with tape measure, pins, needles and scissors and discussed at great length with my grandmother what would suit me. I do not remember who selected material or pattern. All I remember is hating to stand still: lift your right arm, now your left, stand straight, turn round, don’t fidget. Pins were adjusted, the hemline tacked, grandmother worried because one hip was slightly larger than the other. It all mattered. 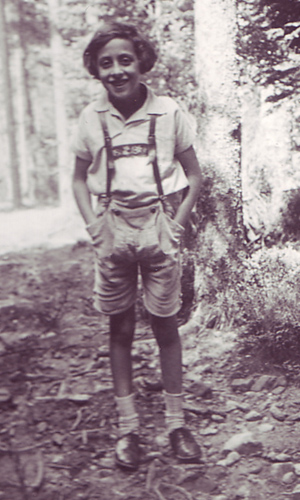 The Pfaff sewing machine went into action. Fräulein Senf, a middle-aged spinster with short hair, went to work until finally it – whatever it was – was ready and once again I had to stand still for final appraisal and adjustment. Did I like my clothes? Hard to say now but I know very well what I did not like. This is not to say that there were no clothes on sale. For instance I had sports wear to go on holiday – also for skiing. I must have been about six when I had, don’t laugh – Lederhosen.

Every so often parcels arrived from England with dresses, blouses, coats and sundries which my English cousin had grown out of. I couldn’t possibly wear those! I thought. None of my friends would approve. Certainly very expensive and very English. But I did like looking through everything and picturing to myself the other girl in England going for walks with her nanny, just as I had seen in picture books.

I was lucky, though, because my father was representative of Ilse Wolle, a famous brand of wool – that is until the firm could no longer employ a Jew. Before I came to England in 1938, my father had two suits knitted for me which I loved. One blue and the other a deep orange. I arrived in time for Christmas and the New year stayed at first with my aunt Margot Ullman, whose father incidentally was Joseph Jacobi Belmont from Paris and her mother, Recha, was my grandmother’s sister. I was asked if I would like a party dress for the festivities but I refused the offer and was happy in my knitted suit. 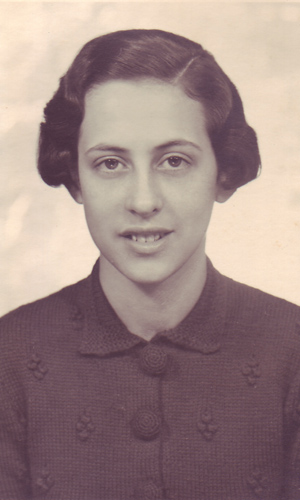 Tante Georgel Schmidt was supplier for Ilse Wolle after my father had set her up in business. She hid him under a packing case when the Nazis were hunting for Jews. This was very dangerous in case she was caught. At that time all I was allowed to bring with me to England was a small suitcase. I remember packing a dressing-gown my father bought me from which I would not part for a long time.

In January 1939 I went to boarding school in Eastbourne. Now I had to get used to school uniform. Horror of horrors we had to wear lisle stockings, even in summer, and dark blue knickers under our tunic. In a letter to Tante Georgel I wrote (translated): ‘In summer we wear long lisle stockings. We wear the same stockings in winter. Auntie Eileen said, when she saw the colour, “enough to make one sick” – greenish/grey/brown, something like that.’

We also had dancing lessons for which we all wore the same white dress tied back at the waist. The dancing teacher was most elegant, I thought. We were taught foxtrot, quickstep, waltz and more, in readiness for after school life. This was considered most important, at least equal to studies. Tennis was important, so was hockey and Lacross. 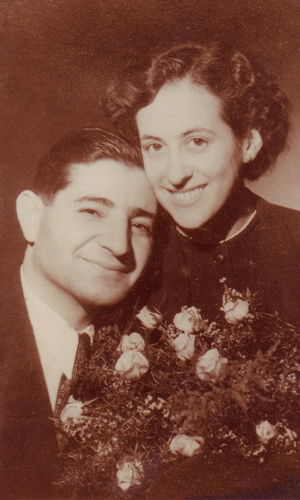 Much later, in the big wide world during wartime, clothes had to be bought with government issued clothes coupons, strictly rationed. This made it very difficult for anyone like myself not so long out of school. I remember when I went with Pa to the Register Office in Hampstead Town Hall to make arrangements for our wedding. The Registrar – a fatherly man – looked at me in my navy school mac with a posy of violets in the lapel, looking ridiculously young anyway, and he advised me not to rush into anything. For the actual wedding, I went with Pa to John Lewis and chose a beautiful dress with a full skirt, not a white wedding dress, of course. In fact many girls I knew at the time, were married in everyday clothes. No fuss, just happy to be together.

During the war, my uncle Nat – Alice’s father – had his contacts in the black market and coupons were no problem. He was very generous and bought me two winter coats. Two!! said the family with raised eyebrows.

Can you imagine the bliss when war was over and after a while came the end of clothes coupons. I went to Gallery Lafayette in Regent Street and really spoiled myself. From now on clothes could be fun. 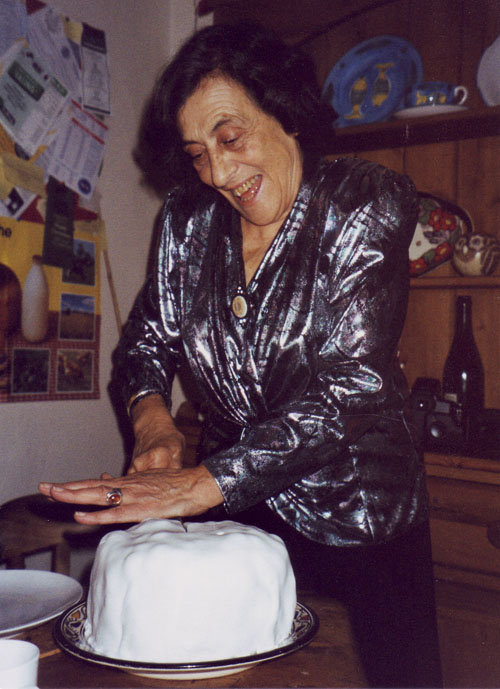 Lore cutting a cake, in a jacket which was probably very fashionable in the 1980s!