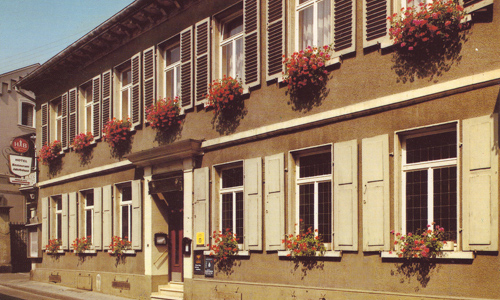 Hotel Jakobslust in my father’s home town Gruenstadt has a long history.

The hotel came into family possession as far back as 1672. The owner during the 19th century was Jacob Becker and his wife Gustel. You will understand why I am mentioning them now. Jacob was an excellent chef who had received training in France. Frau Schlupp was his daughter….THE Frau Schlupp who became the source of much amusement among us. 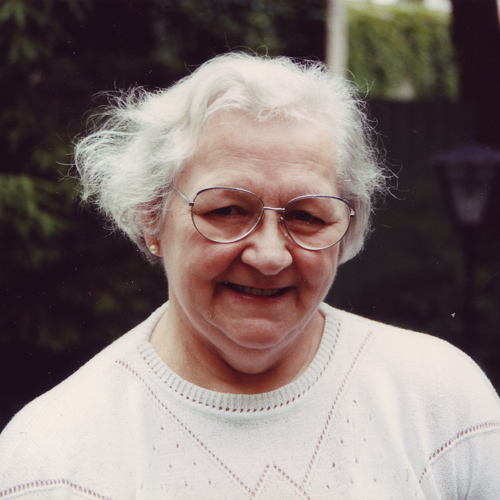 I will first go back to earlier days when the hotel catered for Jewish festivities. For instance, in 1856, the synagogue in Gruenstadt was consecrated. On 20 September of that year, the day after shabat, a celebration was organised at which strange as it may sound to us, a military concert took place from 3-6pm. The full band of the Duke P Hesse’s 3rd Infantry Regiment played. Entrance was 18 francs, the currency of the day.

Interestingly, all were welcome – also at the ball in the evening. At that time, the hotel had a large ball room.

Years later when Hitler came to power, there was an immediate change. The owners refused lodging to Jewish travelling salesmen and it is told that a regular Jewish restaurant guest was no longer welcome. Frau Schlupp’s father-in-law, a grocer, would not supply Jewish customers who had to buy their groceries 9 miles away. I knew nothing of this until much later.

A feeling of guilt slowly changed the locals’ attitude. 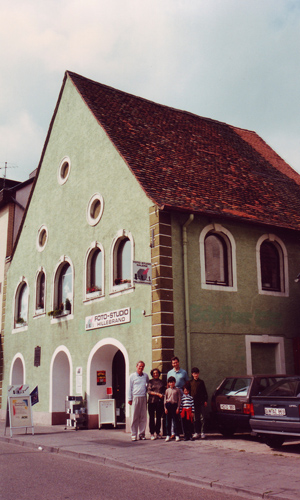 On Kristallnacht on November 9, 1938, the population clamoured to set fire to the synagogue.

However, a baker whose bakery backed the synagogue was able to prevent this to save his business.

The people waiting had to be satisfied to see prayer books, Torah scrolls and furniture thrown from the windows and set alight.

As regards to the synagogue in Gruenstadt, a plaque was affixed in 1988 with the inscription ‘Former synagogue built around 1790, damaged during Kristallnacht. In memory of persecution and death of our citizens and as a warning to the living. 1938 9 Nov 1988 City of Gruenstadt’

It was the same day, Nov 9 1938 that our flat in Frankfurt was damaged by the Nazis.

My granddaughter Hannah asked me “How did the Germans know where the Jewish families lived?” a very sensible question. The answer is that the Germans had prepared a plan of the city showing clearly all Jewish households and shops which were then attacked systematically. Their records came from birth registration and other documents which gave the religion of each person. So all it needed was to identify the address. 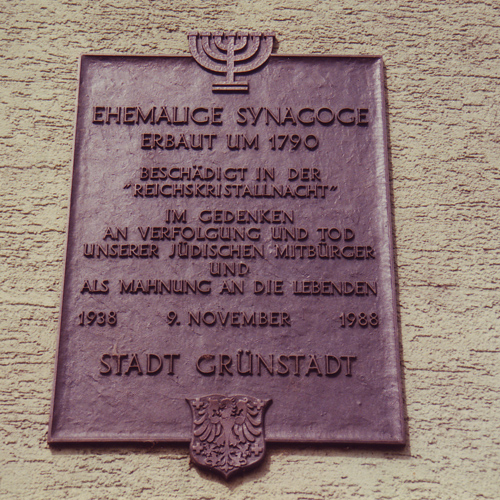 My memories of Gruenstadt go back to early childhood and I wanted to see and show Nick where once my family had lived. Although Hotel Jacobslust was fully booked at the time of our visit, Frau Schulpp suggested other accommodation but insisted, when she knew who I was (the granddaughter of Isaac Jacobi), that Nick and I should have lunch in the hotel restaurant on our arrival. Incidentally, this was our introduction to the excellent food served. On the table were a number of books for us on local history and arrangements had been made for the resident historian to show us round.

I have already spoken about my first impressions and encounters in Gruenstadt and will concentrate on subsequent visits. My next visit was with Ruth, Leslie and the boys – my 3 grandsons Michael, Paul and Stephen. We all remember Frau Schlupp presiding over the running of the Jacobslust from behind her desk, lit by a tall, table lamp. She made sure everything was of a high standard. She supervised the kitchen and made all purchases of food herself. She knew the best local suppliers – farmers, butchers, bakers etc. Tea, when we arrived, was served us in a wonderful white teapot from Vienna, which stood upright on its side with spout pointing up and she made for us an apple tart with a huge dish of Schlagsahne – whipped cream – remembered to this day.

During my stay at the Jacobslust, with Daniel, I showed him where his great grandfather’s factory had stood in Neulingen. The museum had not yet been built in the tower of the castle where samples of the work produced at the factory were exhibited. On a later visit with David in his 1950 Jaguar is another story.

Over the years, there were more highlights of our visits to Gruenstadt and Frau Schlupp. It was in the year 2000 at Christmas that Simon with Eden and Jordan and Jonathan with Joseph and Isaac visited Frankfurt to see my home town. We rented a car and drove to Gruenstadt. I had booked our rooms and had confirmation from Frau Schlupp.

We arrived and found the hotel locked front and back. It was an emergency and no one could give us a reason or explanation. We imagine the worst. Frau Schlupp in hospital seriously ill. So what to do. I phoned Maria in Bobenheim. She set off immediately in her car, instructed Reinhardt to get a meal ready for us all. Her wonderful house converted from an old smithy was a joy. However, we had to find somewhere to stay for the night.

Next day back in Gruenstadt, we found Frau Schlupp in the hotel. Wie on konnte ich denn vergessen, she stammered. How could I forget and apologised over and over again. She had been out shopping buying food for a festive Christmas dinner at the hotel. Staff were told to prepare our rooms and see to the heating. The kids thought the feather beds wonderful fun and threw pillows at each other and humped from bed to bed. Plenty of noise, laughter and screams which must have roused the old rooms from their stupor.