Adult Years - A most difficult journey into the past 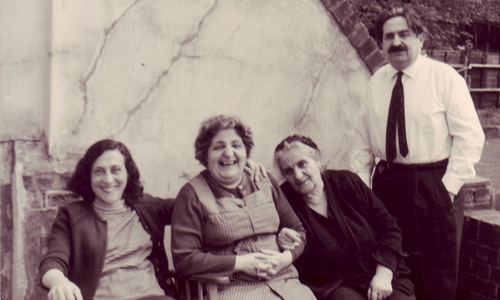 In 19xx Nick and I went to see Babo and Papoutchi and the rest of the family. It was our intention to carry on to Frankfurt to visit my parents’ grave. It was to be my first time back after leaving Germany in December 1938 to come to England.

The train left Milan central station and we were on our way. The journey began well. Babo had prepared for us salami and hard boiled eggs and thermos with coffee in case we were hungry and so, well fortified, we were on our way. After some time, the train came to a halt. It was already getting dark and snow lay on the ground. A short stop, we thought, but nothing happened, no announcements came and time passed. Che cosa? everyone wanted to know and became anxious. We looked out and saw the name DOMODOSSALA on the platform. News had come that the St. Gotthard tunnel was blocked. The train made its way back to be re-routed. Eventually we arrived at the German border. A ticket collector came into the carriage. The sight of him in his uniform and the sound of his voice made me shiver. 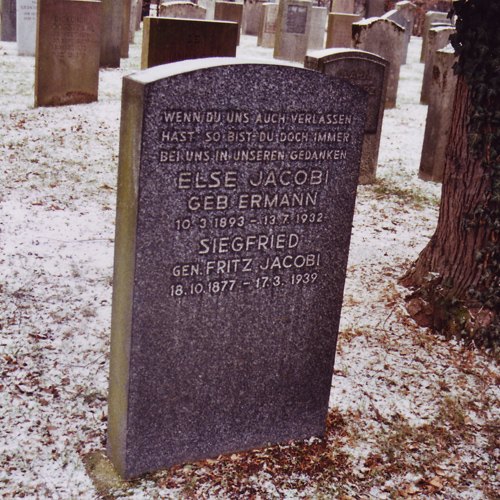 “I am not going back to Germany,” I said to Nick. I can’t go back, no way.” Old memories of Nazi times came flooding in. “You want to go to your parents’ grave, don’t you,” he said and put his arm round me. “If you do, you will have to face it.”

It was a difficult decision. I hated the sound of German and refused to speak it. Nick, with his usual panache and spontaneity, invented words in German which made me laugh and helped me to get over my angst.

I did not want to stay in Frankfurt and had found a hotel in Kronberg in the Taunus, in the hills of Frankfurt. I remembered the area well from my childhood when on most weekends, my father took me for long walks in the woods. Nick and I stayed in the Frankfurter Hof – the namesake of the most elegant and expensive hotel in Frankfurt. This one was furnished in traditional German style and had a large picture in the landing of a man on horseback, reminiscent of Don Quixote. It was still hanging there after all those years, just as I remembered it and realised I must have been there with my father. 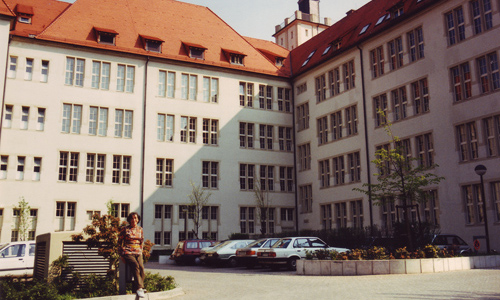 In Frankfurt, we went to the Jewish cemetery to my parents’ grave. The records gave precise location. When my mother died, my father took me there. The Hebrew inscription over the entrance scared me and for years, I did not want to learn Hebrew, even when I transferred to the Philanthropin, a well-known Jewish school, which I attended after the Nazis decreed that no Jewish children were allowed to attend State schools. My resistance to Hebrew continued and I remember the Head Master testing me on grammar, which I failed miserably, and prayers, which some of the girls could recite fluently, remained for me a closed book.

My father died in March 1939. He left instructions to be buried with my mother. For religious Jews, cremation was not allowed, but it had been my mother’s wish and my father’s too. By 1939, the Nazis had forbidden for Jews to be cremated in Frankfurt and it was left to my grandparents to go to the crematorium in Offenbach, a few kilometres outside Frankfurt. Together they went there, accompanied by a friend, and then had to arrange for my father to be put to rest with my mother. It must have been a terrible and traumatic time for them. 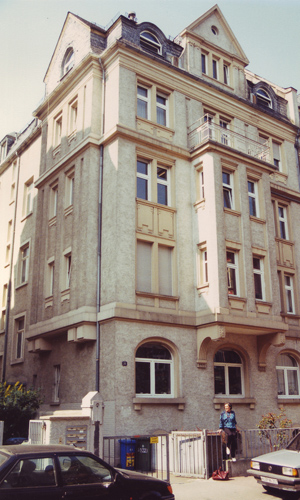 After my mother was buried, my father planted a beautiful rose bush on her grave. It was no longer there and I wanted to plant a new one. We were told of a nursery and took a tram from the cemetery. A most friendly and helpful conductor stopped especially to let us get off and explained how to get to the nursery, in German, of course, to which I responded without hesitation for the first time.

In Frankfurt, I showed Nick my father’s house in the Morgenstrasse 36 in Sachsenhausen across the river Main, which he was forced to sell when the Jews were no longer allowed to own property. After the war, when the Germans paid restitution, I handed in my claim with my lawyer’s assistance. Eventually the house was returned to me and when I, in turn, had to sell it on the advice of the administrator, as from a distance it became too difficult to cope with constant demands for repairs etc. from the tenants of the flats, I even received compensation for bomb damage to the house during the war.

Georgel (auntie Tante) Schmidt still lived in her old flat in the Niedenau 52. We went to see her. Not having children of her own, she looked upon me as a daughter and I loved her. Friedel, her husband, had since died and she lived with her sister. Nothing had changed in her flat and it felt like stepping into the past. Georgel had accompanied my father when he saw me off to England. It was a difficult moment of parting. Suddenly, my father turned to her and said “one day you will hear her on the radio.” How could he have known! 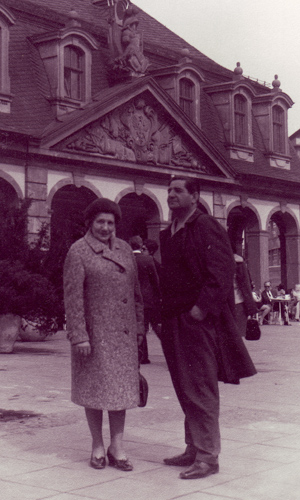 On a subsequent visit to Frankfurt, as Nick and I climbed the stairs to Georgel’s apartment, we found her lying on the floor outside her front door with her sister standing by her quite helpless. “Der liebe Gott hat Euch geschickt” Georgel called out. We got her on her feet and helped her inside. That was the last time we saw her. She asked me what I wanted to take back with me and I chose a small painting my father had given her of a favourite place of his in Sweden.

On the first visit back to my home town, I showed Nick my primary school in Sachsenhausen, the Philanthropin, the Jewish school I attended, and of course, our flat in Scheffelstrasse 11, which was damaged by the Nazis during Kristallnacht on November 9, 1938, where my grandparents continued to live after my father’s death. Prior to their deportation to Theresienstadt, it became one of the assembly points selected by the Nazis, from where they took resident Jews to concentration camps.

I have since been back several times and showed my family where I spent my childhood and gave them family history in situ.