Papa’s car was a Citroen.  It had no boot but an elongated bonnet.  We went to the Blackforest in it.   There is a picture of me leaning out of the car window with a bunch of heather in my hand, pleased as Punch. 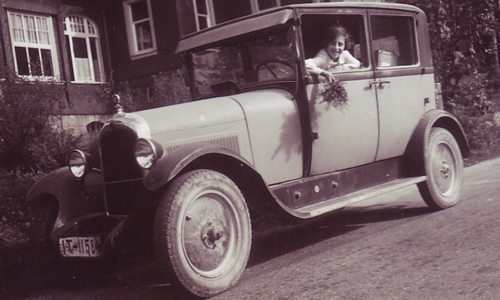 But I remember my Angst when we drove up a very steep hill and I thought we were going to roll backwards.  I made such a scene that my father told me either to shut up or get out and walk.  I stayed.

Holidays in the Black Forest were fun.  Our favourite hotel was in Breiten-brunnen, situated among pine trees.  There I had my first skiing lessons and I got up before anyone else to practise on my own.  The hotel also had a bob sleigh which went at a terrific speed down the steep road, especially dangerous when icy.  I was put at the back to take control of the breaks and the four of us, that is Oswald and two others, whizzed downhill.  When we overturned, somewhat bruised and shaken, we had a telling off but were undeterred. 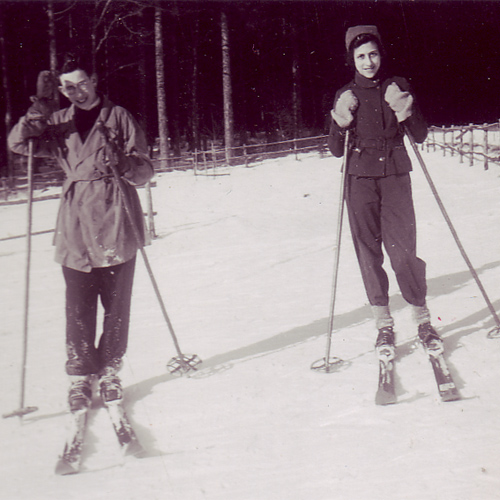 Georgel and Friedel Schmidt came with us in the winter of 1937.  They were wonderful company and I loved them dearly.  In a previous year, Papa and I made an excursion to the Hornisgrinde, a tourist attraction on a mountain top.  There was dancing going on in the afternoon.  I remember two English women tourists talking to us and Papa enjoyed being with them.  They wanted to dance but Papa was afraid, even though they were English, for this was punishable and considered Rassenschande by the Nazis.

Papa was keen on outdoor activities for me.  There was a boat house on the river Main where we spent afternoons.  He wanted me to learn canoeing and after some instructions put me on the river.  The current carried me away and river boats were coming towards me.  That scared me but taught me not to lose my nerve and I manoeuvred back safely, a little shaken, but quite proud of myself.

On New Year’s eve, there were wonderful fireworks on the river with rockets going up and golden showers cascading from the bridges.  When the DX with its 12 propellers flew low over the town, it was an amazing sight.  It had water skis and landed on the river.

The Zeppelin was even more exciting.  When it came to land, ballast was thrown out and ropes released to pull it down and secure it.  It was thrilling to be allowed into the gondola and to see the interior structure which looked like a huge metal cage.

Fastnacht was an annual holiday when we dressed up as clowns. 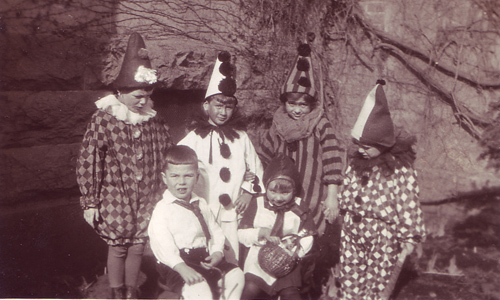 The streets were full of people and we children carried a Klatsche, a brightly coloured paper swatter, with which we gave each other, and anyone close to us, a smack on the behind.  It was great fun, a bit like a carnival.

All this belonged to my early days.

My grandmother enjoyed her coffee afternoons when family and friends were invited.  Hand-embroidered table cloth and best china were a must. There was a selection of home-baked cakes and biscuits and of course aromatic coffee.  On one occasion my aunt Bertha was there.  I did not like her.  She was wearing a new skirt, made of woollen cloth, which everybody admired.  I got permission from Oma to play under the table.  A strange request but I was still small.  Unknown to her, I brought with me a pair of dressmaker’s scissors and whilst the ladies were in animated conversation, I cut a few inches into Bertha’s skirt.

Oma looked under the table to see if her Lorchen was alright.  There was a yell: “Bertha, Bertha, sie schneidet dir den Rock” – “Bertha, Bertha, she is cutting your skirt.” I can still hear it.  My aunt screamed and I fled, fled into the toilet where I locked myself in, to escape wrath and punishment.  I do not remember the outcome of the episode.

My grandmother had a brother in Frankfurt called Joseph.  He was married to Leni, a Christian.  When the Nazis were searching houses for firearms, they found an old revolver which Joseph had kept as a war souvenir.  This landed him in prison.  Leni went every day to bring him food and made terrible scenes, demanding his release.  I do not know how long Joseph was kept in prison but when he came out, he would never speak of what was done to him.  he came to England with Leni, assisted by his sister Betty, who was also my grandmother’s sister.  When Joseph died, Leni said she was daily in communion with him.  No one was surprised as she was always considered odd.  It turned out that unknown to the family, Leni had two illegitimate children who claimed inheritance after her death.