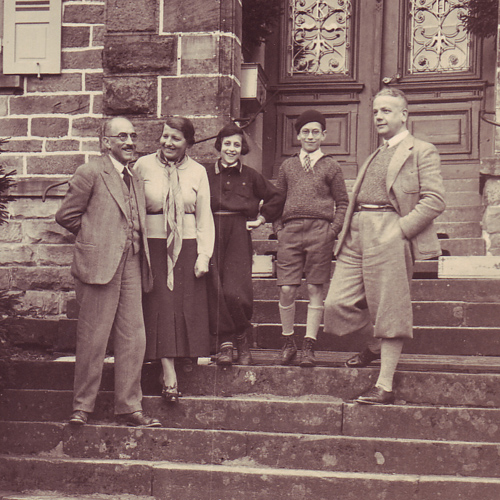 My first impressions of England are recorded in the letters I wrote in 1939 to Georgel and Friedel Schmidt, our dear family friends in Frankfurt.

I appear to have settled very quickly and successfully into my new life. This is especially astounding, taking into account the recent horrors of Kristallnacht and Nazi persecution which I had left behind.

The death of my father in 1939, three months after I left Germany was totally unexpected when it came, so was the sudden knowledge that I would not return home at some future time.

The letters were kept for me by Georgel Schmidt, together with books, albums and special family treasures which my grandmother had entrusted her for safekeeping before her deportation to Theresienstadt.

When war broke out communication became impossible. Therefore my anguish at my father’s death is not recorded.

Sometimes I addressed Tante Georgel and Onkel Friedel ‘dear Fishessers’ (fish eaters) notably because they liked fish and I did not. Also they became ‘Provincials’, since Frankfurt had shrunk in size and estimation and could not be compared with the imposing grandeur of London.

I think Papa has shown you my letters and you are acquainted with everything. I was weighed here and am 7,4 stones, that is 91 ½ pounds. Tante Margot will see if I gain a little which is not difficult here.

In the mornings I have toast and white bread and ham and eggs and Marmalade. For lunch there are vegetables and meat and always a delicious dessert mostly with whipped cream or tarts. Tea in the afternoon and evenings soup, meat and vegetables with potatoes; for afters a lot of fruit. So you see I am not starving. How is business? Everyone thinks that the powder compact is lovely and the handkerchief too. The other day I was invited, which you surely heard, and that I was given two soft toys, a boy and an elephant and a gorgeous gossamer handkerchief. I have also been in the City. You can’t imagine how big London is. From here to Oma’s sister takes half an hour by bus, but from here to the City definitely one hour. Tomorrow I am going to the zoo. Everyone likes my clothes. It is not any colder here than in Frankfurt. I lead a real bon vivant life. Give Frau Spoerr my regards when you see her. Here at Tante Margot they speak a lot of French. There is also a sweet dog. It is treated like a human being. I must stop now because I am going out.

Lots of love and kisses