Is it easy to put together the years of one’s life?
Some have total recall.  Others like myself, have a patchwork of memories, faded and vibrant in turn – a tapestry to hang and view up close or from a distance, revealing and concealing facets of life viewed through the prism of one’s eye.

Come close and see a street in Sachenhausen across the river Main, Morgensternstrasse by name.  See the baby girl Lore, born into the family Jacobi.  Black hair, black eyes. 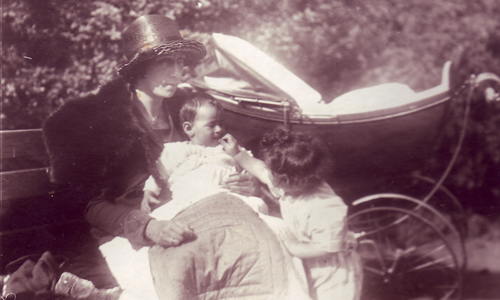 Move along, see her sitting in a pram of 20’s vintage, looking at the world around, close to her mother Else, happy and secure.  A little brother, Oswald, stands there looking at the camera, told to keep still.  That was early beginning.

Move on.  Old enough now to sit in a pushchair and there, a little further, on her feet, holding a doll, fringe hair cut.

Now come and stand before the house, No. 36, bought by Fritz in 1937 and forced to sell by the Nazis.  Large, comprising several flats – one of them ours.  Treasured possession is Else’s bookcase, constantly added to and lovingly cared for until Kristallnact November 38, when men with iron bars demanded to enter and smashed furniture.

Was I a good child?  I cannot recall.  A doll’s pram kept me occupied, also a child’s cooking stove with all the accessories, quality made, plastic still unheard of.  Picture story books were at hand and later, a Punch and Judy theatre with glove puppets provided constant entertainment.  Papa gave us shows with his magic lantern, forerunner to films where slides were moved along by hand.

School started at the age of 6.  Schwanthaler Schule for me, round the corner from the Morgensternstrasse. 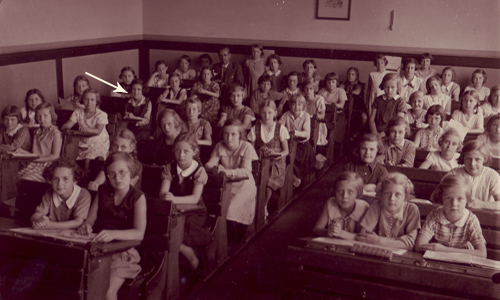 The first day was a special event.  As was the custom we children carried a colourful Tüte Bonbons, cone shaped, filled with sweets and chocolates given by parents.

Our teacher was Herr Knauff who had to manage between 40 and 45 girls.  No time was wasted.  We had a slate and and chalk and a little sponge to erase mistakes.  Now we began the laborious task of learning the alphabet, first in Gothic letters.  Everything had to be neat and tidy and Herr Knauff walked up and down the lines to inspect that work was done properly.  Any misdemeanour was punished and the culprit sent to stand in the corner of the classroom facing the wall.

My special friend was Hilde Abendschein, a Catholic girl. 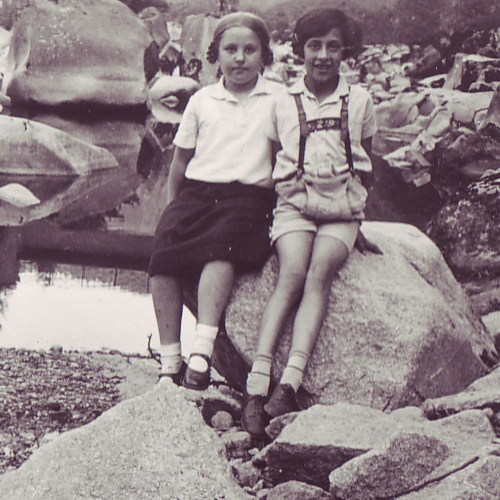 Others who also lived in the Morgensternstrasse and were in  my class, and had been playmates, joined the Hitler Youth early and quickly learned to ostracize me.  I did well at school and our trusted maid remembered that I always brought home good marks. In her letter of March 1947, Lucie writes ‘Be assured I remember Christmas in your parents’ home.  It is all unforgettable to me when I celebrated the festivities with the Jakobis.  Dear Lore, the way your papa played Father Christmas I have never seen again it was too wonderful and is forever in my memories….”

My mother fell ill.  She was diagnosed to have cancer of either stomach or liver, I can’t remember.  She suffered terribly.  Oswald and I tiptoed around the flat and had to be very quiet.  When we bounced a ball against the wall we were told to stop.  My father spent a fortune on doctors.  To no avail.  The cancer grew and my mother died in 1932.  Papa was inconsolable and at first wanted to end his life to be buried with her.

Oswald and I had been sent to the Tanus, hills north of Frankfurt.  Papa came to take us out in a Droschke (horse-drawn carriage) and told us that Mama had died.  I remember Oswald crying and trying to comfort him.  We went to the grave in the Jewish cemetery in Frankfurt.  Seeing the Hebrew letters over the entrance gave me a shock and for a long time I felt a strong aversion to Hebrew which continued until I went to Israel in 1948 when I realised that Hebrew is a living spoken language.