(Please allow a minute for slideshow to load below)

Introduction to Fritz Jacobi by Lore

"My father, Siegfried called Fritz, was born in Grünstadt. He volunteered for the army in 1898 at the age of 21. He fought in World War I and was demobilised November 1918.

Fritz became representative for ILSE WOLLE, Wupperthal and settled in Frankfurt. In March 1920 he married Else Ermann.

They had 2 children, Oswald Herbert and Lore.

Else died in 1932 and arranged for Else's parents to live with him and look after the children. Life became increasing difficult during the Nazi period. He was forced to give up work and had to part first with Oswald and then with Lore in December 1938. By then he was exhausted and devastated and died of a heart attack in March 1939." 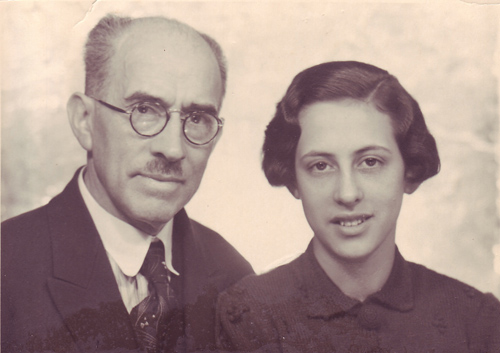 This photo was framed and the following message was handwritten on the back (in translation by Lore):

" Times may change and people,
but the ties of true friendship and loyalty cannot be severed.
30.12.1938
Two loyal friends "

It is likely that this framed photo was given from either Fritz to Lore or vice versa, when Lore left for England. Fritz died a few months after this frame was dated.