Introduction to Sally and Clara Ermann by Lore

My grandparents Sally and Clara Ermann were married on 10th June 1892 in Frankfurt/Main. As was the custom of the day, the occasion was celebrated in style with entertainment written, sung and presented by various members of the family. A wedding journal, 'The Sun' provided humorous comments on the young couple and relatives.

Sally and Clara Ermann lived in Klüberstrasse 12 in Frankfurt. 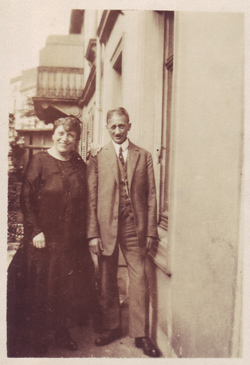 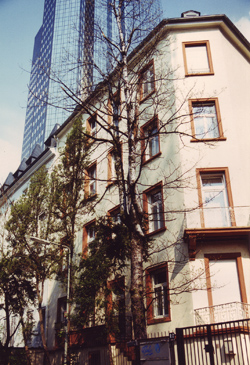 When we were children, we often visited there. We were allowed to go into the official stockroom, where Opa kept his store of men’s underwear etc., the ledgers, a large desk and an enormous press which we were not strong enough to operate. Opa was a member of a club where he and his cronies regularly played cards and smoked cigars.

Sometimes I went there to give him a message. The old gentlemen would then pat me on the head, look at me through a haze of smoke, smile and carry on immediately with their game. The Klüberstrasse is still as I remembered. It has remained a quiet street, dominated now by glass facaded commercial banks which rear into the sky behind the residential area.

Fate was cruel to my grandparents and took away in death first Gretel and then Else, both in the year 1932.

Translation of letter above, Frankfurt 10.08.32

My heartfelt thanks for your condolences and flowers which you sent us on the death of our dear Else. She had to bear her suffering to the end; she is at peace now but our pain is all the greater, the pain that we have her no longer with us. Now our poor Else has followed our unforgettable Gretel. Just as they held together during life, they are together in death and they have left us behind. How hard Fate is with us. If tears could bring back our two loved ones, they would have been back with us a long time.

And so we must compose ourselves and must summon all our will and strength to keep going for the sake of the children who need us.

Fritz is quite inconsolable and I myself am often beside myself. I need and must give Fritz support and my heart is heavy to bursting.

How are you and how are you feeling dear Nat? And what are the children doing? Perhaps you will come and see us. It is so long since we saw one another; how happy we were then and now everything is gone. Our little ones are well, thank the Lord, and give us pleasure.

And now I leave you with warm greetings,

I thank you and your husband sincerely for your sympathy on the hard blow fate has dealt us, even though it was anticipated.

Click here to continue reading the story of Sally and Clara as told by Lore...