The family Jacobi have had an interesting history which can be dated back to the mid 18th century.

The Rhine Palatinate, where the family had settled for some generations, had been taken over by France in 1801. The Jews resident there, were up to that time known by their first names only until, in 1808, they had to acquire and register family names by edict of Napoleon. My great-great-grandfather, Isaak ben Jakob, born in 1768 in Gruenstadt, chose the family name Jakobi, spelled initally with K but in time, the K was changed to C.

In 1800, Gruenstadt had a population of 165 Jews which increased 8 years later to 302. Between the dates of 11 to 22 November 1808, all Jews had to appear before the Maire (Mayor) Bordollo to register their new family names. They were either unable or unwilling to write German. There were 19 entries for Jacobi, 5 Prendano, Leopold, Schweitzer, Wolf etc. According to records written in French, for this was during Napoleon's occupation of the Pfalz, Bessele or Bele Loeb, applied on 17.11.1808 to change her first name to Barbara and the family name to Jakobi. This was my great-great-grandmother married to Isaak Jakobi.

It is interesting to note that the name Jacobi was already in circulation at that time. In 1712, a Johann Friedrich Jacobi bought a parcel of land on the upper part of the market next to his house, which became known as Jacobi Markt. Gruenstadt had a market since 1556, when two brothers, both counts, were granted in Brussels by Kaiser Karl V the right to have a market every year on Saint JAKOBUS and on Saint Nicolas day, in addition to regular Saturday markets. 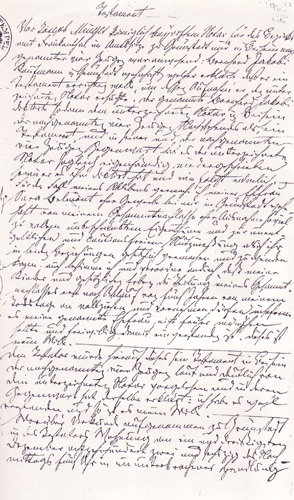 The first two generations of Jakobi were fanatically religious. They refused to be photographed and strictly kept to the tenets of the 10 Commandments. My grandfather Isaak Jacobi (1837-1893) considered himself liberal as did my father's generation. Isaak was the eldest of many children of Bernard Jacobi (1807-1875) and Sara Belmont (1814-1875) whose intriguing family history will follow. 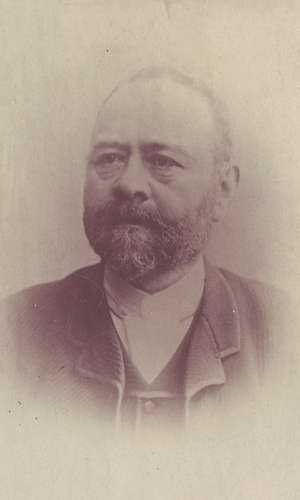 My great-grandfather, Bernard Jacobi, owned a Department Store or General Store, as it was known, in the Hauptstrasse (main street) around the corner from the Market Square in Gruenstadt. His son Isaak, my grandfather, went as a young man to America to seek his fortune. So did another brother, Julius, who was reputed wild and found himself in trouble at home. Eventually, he became the owner of a large hackney bus enterprise in NYC. There was no official population register in the States at that time and his descendants could not be traced.

Isaak, on the other hand, bought a horse and wagon in USA and peddled housewares in the Pensylvania Dutch country. Dutch here means Deutsch. The farmers came 300 years ago from the Pfalz and nearby areas. Gruenstadt, you will remember, is located in the Pfalz. To this day, they speak a Pfaelzer jargon and call themselves 'Pennsylvania Deitsch.' They are orthodox Mennovites, a Christian sect named after Menno Simons (1492-1559), who do not mix with the outside world. 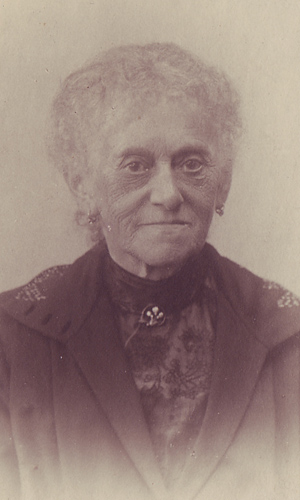 When Bernard Jacobi died very prematurely, Isaak was called home by his mother. Together with one of his cousins, he concentrated on running the family store to hold the large family together. They expanded into the Wholesale business. One of their suppliers was the Steingutfabrik Mehlem in Bonn. When the owners liquidated, they suggested to set the Jacobis up in the Steingut (earthenware) manufacturing business, especially as raw materials- clay- were available nearby.

The Jacobi cousins cleverly associated themselves with Moses Adler, a flour miller in the valley of Neuleinigen (4kn outside Gruenstadt) who had a water wheel and commanded hydraulic power. This was in the middle of the 1860s. There was already an earthenware factory in Gruenstadt proper, which was the successor to the famous Frankenthaler Porzellan Manufaktur. As Germany at that time was in the transition period from an agricultural to an industrial economy - especially after the Franco/Prussian War (1870-71), there was a seller's market, the population gaining more and more purchasing power. Consequently, the new business grew head over heels and expanded rapidly.

Both Jacobis married, my grandfather in 1871 and his cousin the following year. 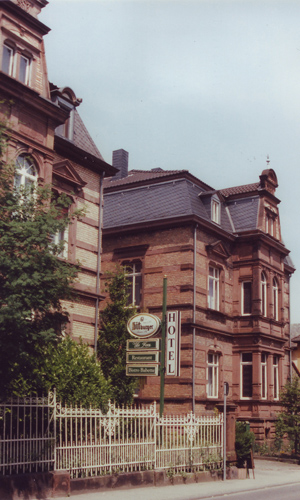 Their wives were cousins. The dowries were put to good use and invested in the factory. With greater liquidity, at the Paris World Fair, the Jacobis bought the Licence to build a 'Tunnel Kiln', which enabled them to produce more efficiently in a kind of mass production process.

During this time they lived very modestly, both families above the store, which was still operated by the wives. In the time, when their daughters approached marriageable age, they became socially ambitious. In 1892, they built twin houses during the coldest winter on record, the most elegant dwellings of their time in Gruenstadt. Each house had 12 spacious rooms plus kitchen, bathrooms and laundry. Kitchen and laundry were in an extension of the building, so that the domestic odours were kept away from the main part of the houses. Each house cost 80, 000 Mark to build which, in 1892, was a real fortune. Extensive stables and a coach house were behind the large gardens.

During the years leading up to World War I, the factory Jacobi, Adler & Co. produced very high quality goods. Up to that time, they imported most of their clay from England. However, due to price wars, they sacrificed quality and made 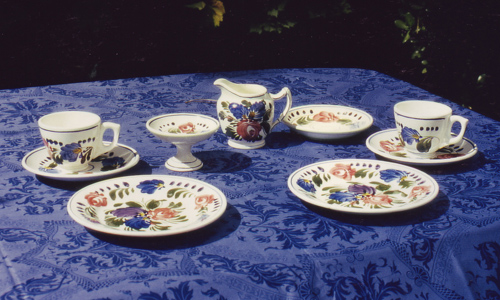 inferior wares. They even stopped using their well-known trade mark. The early products, showing the trade mark, are very valuable collector items today. They are listed in the US collector catalogues. The factory made possibly the first fireproof cooking utensils.

During the great German inflation (1923) the old currency was converted to new money on the basis of 1,000, 000, 000, 000.00:1. The business survived and at the end of the inflation, the partnership was converted into a corporation which eventually went public. By this time the business employed approx. 300-350 people and was one of the major enterprises in this field. However, the equipment became increasingly outdated and the principals older and less energetic; also they could not get on too well with one another. They were no longer competitive and were constantly losing money. They were by no means short of orders, but prices were depressed as more recently-built and more modern factories could produce much cheaper goods. As a result, in June 1932, it was decided to liquidate. Fredrick (Friedrich) Jacobi, who later emigrated to the United States, was then Chairman of the Board and remembers events well.

Over the years, the family Jacobi were highly respected, not only among the Jews even beyond the borders of the Pfalz, but among non-Jews as well. Berthold Jacobi (father of Friedrich) was on the Board of Directors of all the major Jewish provincial organisations and held the coveted social position of Supervisor of the voluntary Fire Brigade of the entire Province. He was also an officer of the Province's Free Mason Lodges as well as being a German army (reserve) officer, which was difficult to achieve under the Kaiser.

My grandmother Sophie, nee Siegel, was born in Mosbach, near Heidelberg. She had 3 brothers and 1 sister, who were brought up by relatives on the untimely death of their parents. The 'shittich' with my grandfather was arranged by the wife of one of the grand-nephews of Barbara Jakobi, who also came from Mosbach. They were married in 1871. In 1893, one year after the families had moved into their newly built houses, Isaak Jacobi died of a stroke. The houses in Obere Bahnhofstr. 21 (now renamed Post Strasse) belonged to the undivided estate Isaak Jacobi, who had died in testate.

During the inflation, Sophie was badly hit and lost her assets. Of her four children, Alfred, her eldest son, lived in the house with his wife Else (nee Marum) and their son Paul. Alfred never paid rent in any form to the estate, which would have given Sophie more liquidity. He even made his mother sign a Will on her deathbed, leaving him her share of the undivided estate. After Sophie's death my father went into litigation with his brother Alfred.

Whilst she was fit, Sophie spent much of her time with her daughter Bertha, and my parents in Frankfurt. However, she fractured her hip and developed cataracts which left her almost blind. She was then confined to her rooms on the second floor in the house in Gruenstadt and was totally dependent on the care and good will of her daughter-in-law and her son. Else treated her badly and Sophie felt like a prisoner. The Jewish women in Gruenstadt visited her regularly and brought her small gifts.

My own memories go back to visiting my grandmother in her rooms. She always had a wonderful assortment of home-baked biscuits which she kept in a large cupboard. The room would fill with an aroma of spices when she brought them out and she delighted in seeing me tuck in. I loved my grandmother and was shocked already as a small child when I overheard my aunt scheming against her. I would pass on whatever had been said. 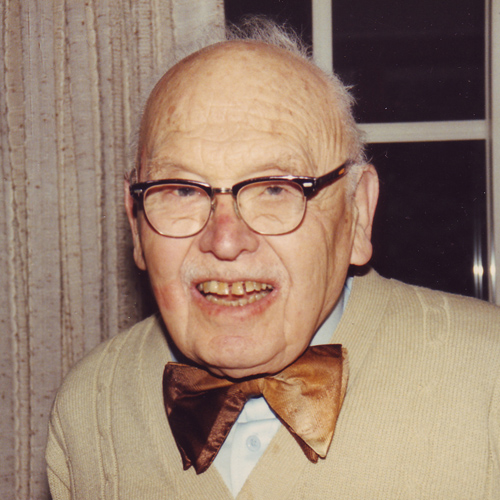 Frederick Jacobi reminded me that I had been the apple of my grandmother's eye and nothing would give her greater pleasure than to have 'Lorchen' as the topic of conversation.

Another memory is of my grandmother force-feeding geese she kept in her garden at the back of the house, to fatten them ready for Christmas. They were roasted in a wood-fired oven and tasted delicious, as did the home-made pâté de foie gras.

Whenever my father took me with him to Gruenstadt, we went to the vineyards. I quickly learned to appreciate the local wine which was brought to the table at mealtime. For this reason I could never understand all the fuss made in England when giving a drop of wine to children, and made me write home that 'in England you drink wine only when you are old.' 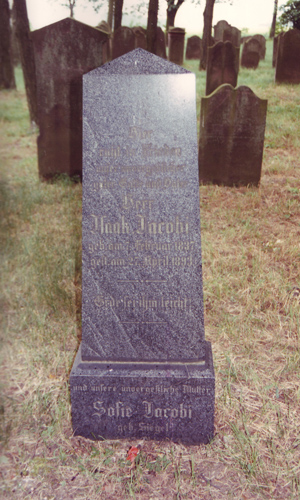 Years later when visiting Gruenstadt with my father, we went to the cemetery to put flowers on my grandparents' grave. I remembered the black marble stone and found it immediately on a visit after the war. The cemetery is now a historic monument. During the Nazi years, however, it was totally neglected and some grave stones were vandalised. The grass stood knee-deep, the surrounding fence was broken and the entrance gate impossible to open.

Not until 1981, after repeated representations and much protest, was something done to repair the damage and keep the grounds tidy. This came about in a joint venture by the Jewish community in the Pfalz and the town administration. According to German law, the latter is now responsible for the maintenance of the newer part of the cemetery, whilst the upkeep of the old burial ground rests with the Jewish community. A rabbi was appointed to visit and check over the cemeteries and authorize repair of grave stones. My grandparents' memorial stone was taken off its pedestal and cemented into the ground, thereby greatly reducing its height.

Old records show that Gruenstadt had a synagogue since 1856. An announcement in the Gruenstaedter Anzeigeblatt of the same year reads as follows: 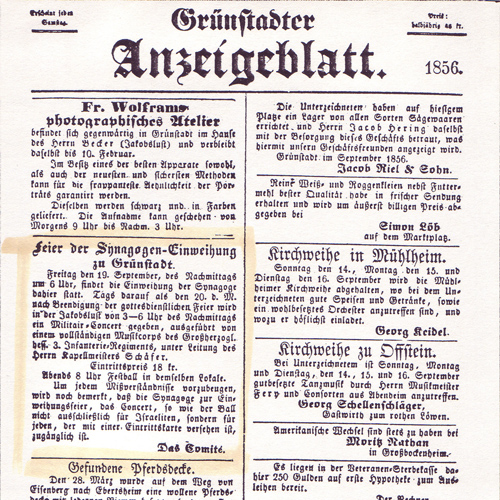 Synagogue Consecration Festivity The consecration of the Synagogue will take place in Friday, 19 September, at 6 p.m. After worship on the day following, 20 instant, a military concert will take place at the Hotel Jakobslust from 3-6 p.m. when the full band of the Duke of Hesse's 3rd Infantry Regiment will be playing under the baton of Kapellmeister Schaefer. Entrance 18 fr.

A ball will be held at 8 p.m. on the same premises. To avoid any misunderstanding, the festivities for the Consecration of the Synagogue, the concert as well as the ball, are not exclusive to Israelites, but are open to all with entry tickets.

Slideshow about the beautiful Jacobi houses and factory